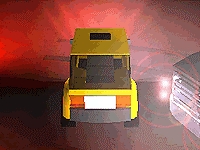 Toy Car Simulator is a 3D car simulator game which lets you play with dozens of toy cars! It's a game with various game modes: free ride in which you freely explore a big city and collect coins, highway mode in which you participate in an adrenaline pumped high-speed car race to collect coins and avoid traffic, and lastly arena mode in which you compete with other toy cars to eliminate each other. In the first 2 modes, your car relies on battery; fill it occasionally by picking up the red thunder power-up. Don't forget to collect coins to unlock more awesome rides, including a helicopter and even a tank! All of the game modes are guaranteed to let you have fun for hours! Play Toy Car Simulator game for free at friv5000.org. We offer the best way to enjoy playing for free. Toy Car Simulator is one of our very best Friv 5000 games.