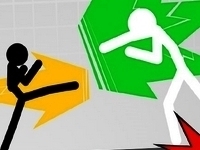 You like fighting games and stickman games? Then this game was made for you! Enter the arena and play as a heroic Stickman. You must fight against your opponents. You must have no mercy against them. To win, you have to kill them all. But watch out because you'll face numerous warriors. Here you can play Stickman Fighter: Epic Battles game and observe its walkthrough at no cost in friv5000.org. Stickman Fighter: Epic Battles is an wonderful game from our list of Friv 5000 games.

Use Arrow Left And Arrow Right button to Attack left/right, Use Left Mouse button to Interact,